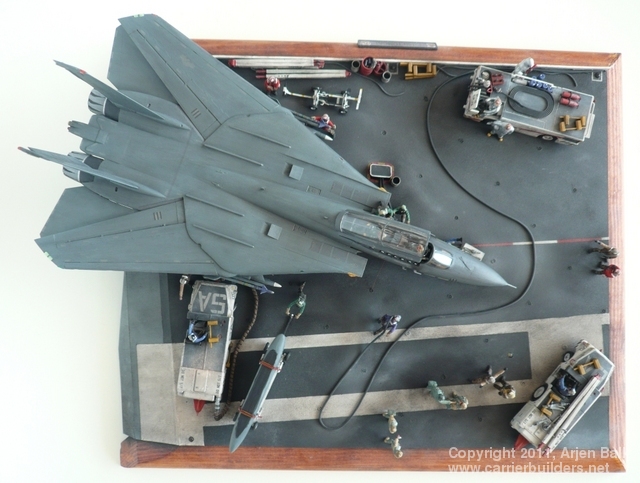 March 15, edited We've discussed Tomcats before but to summarise Mike alrady nailed the best: the newer mould Hasegawa kit. This is available in many variants and the various boxes cover all the correct details for every version in different timeframe. It's an expensive kit, but the amount of details and option included is fantastic. The moulds are now a bit worn, an older issue may be a better option. Decals vary in quality depending on the boxes, the later ones are pretty good, the earliest ones less so.

The main drawback is the lack of any weapon and the use of PE parts for the cockpit may not be to everyone's taste.

As you don't mind which version, the Fine Molds FD is also at the same level, better than Hasegawa in some areas but less so in others. Unfortunately this kit is not easy to find as it was only issued together with a Japanese magazine. A close second is the Fujimi kit, almost as sophisticated as the Hasegawa one and with some details that even better its Japanese rival.

The Hasegawa and Fujimi kits also allow slats and flaps to be deployed, the Fujimi kit even has all the parts to represent an aircraft ready to be launched from a carrier. Then there's the rest The Revell decals are also better IMHO Academy, this is let's say "inspired" by the old mould hasegawa kit but with more options and recessed panel lines.

I built one and didn't enjoy it much, fit wasn't great and there were plenty of ejector pins in some very annoying places. Decals in the latest releases are very good, those in the original release are almost useless..

Old mould Hasegawa Italeri, again raised panel lines and some suspect shapes, some details are not too bad though. Same for the Monogram kit that represents the wooden mock-up But what's the point of searching for any of them? Now let's talk money The Hasegawa and Fujimi kits are not cheap, some Hasegawa boxes are ludicrously expensive!

All others are much cheaper. If money is a problem, then you'll not like the price tag of the Japanese kits and will settle for an HB or Academy. My view is however that it's worth searching for the best possible kits. Japanese shops sometime have the Hasegawa Tomcat cheap enough, particularly the "basic" "Atlantic Fleet Squadron" box.

Then there's the second hand market I have several Hasegawa in my stash, all coming from swap meets and similar. Same for the Fujimi ones.

Not that I don't have the HB kit in the stash, I have two

Here we see the finished windshield glued in place with thin super glue. I was happy with my decision to use the kit supplied decals for the cockpit panels as I think they look very effective at this scale. This is needed because the FD had the glove vanes removed completely so be f 14 tomcat 1 72 to fill and sand join on these parts. The FD variant was first delivered in Working in such close proximity to the canopy clear parts with glue makes me nervous and so I chose to use CA glue to attach the mirrors.
Share :